As we near the Queen's Platinum Jubille this week we thought we would take a look back at when her Majesty Queen Elizabeth II & Prince Philip visited Sywell in July 1965. On arrival they were met by the Earl Spencer, the first President of the Northamptonshire Aero Club, and they travelled in an Andover of the Queen's flight.

Unfortunately, on departure the aircraft had sunk a little in the soft grass requiring near full throttle before the aircraft lurched forward to taxi for take-off!

We would like to Congratulate Her Majesty the Queen on her incredible milestone Platinum Jubilee, and we wish everyone a wonderful Jubilee weekend! 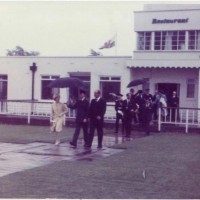